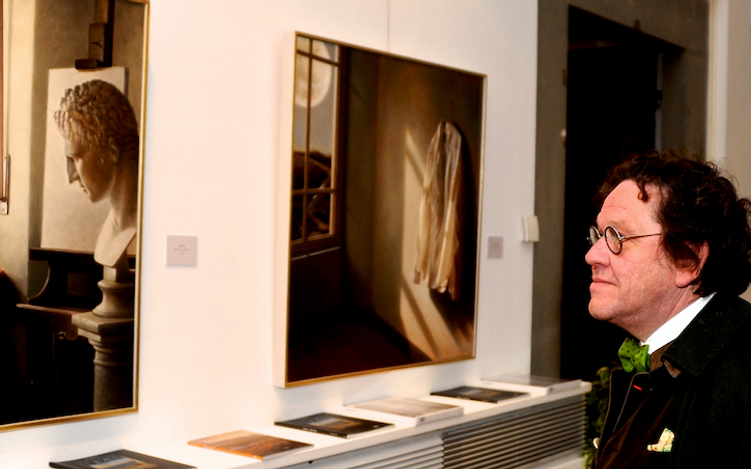 The Neapolitan is, by divine right and by birth, not surrealist but extra-real.

"Journey through time" by Antonio Nunziante is the most suitable title that this Neapolitan painter has given to some of his recent works. He gave it, aware perhaps, with intuition for sure, for three different reasons. The first, undeniably the most attractive for the cultural anthropologist, is the one that refers to his Neapolitan origin. Those born there cannot be estranged from the historical conditions that shape them, they cannot help feeling Greek in a certain way, and since we know nothing about ancient Greek painting, they can only try to invent it by taking up the stories that the literature of that time wanted to convey. The ancient artist is narrow and constrained in the vision that philosophy has transmitted to us: he is bound to mimesis, to the need to return not so much reality but the idea that reality is the source and from which thought is bound..

In Naples, however, one is both Greek and Platonists. And the idea that constantly dominates the creative psyche is that of an impending antiquity that constantly resurrects, which is alive well beyond any desire for quotation. When Winckelmann made his trip to Paestum, he went up to see and survey the ruins of the past, but in his romantic and modern mind he was attracted up and unstoppable way by the desire to find what was still alive of the past, the famous rose of Paestum and the waters in which the bulls of the gods drank. It matters little that being a Pole he confused the rose with the oleander; but the oleander was like that, different from Polish summer roses, it can truly seem the flower of an antiquity still alive today. It also mattered little that the buffaloes he found in the marshes had been imported by the Bourbon monarchy; for him, accustomed to seeing peaceful cows in northern Europe, those were the direct descendants of the bulls of Minos the Cretan and the terrible Minotaur. And that is why in front of the temples of antiquity, extinguished in their ruins, the rose and the palette that wants to portray it appear in Nunziante's paintings.

The other reason. perhaps reserved only for those who know and frequent the Neapolitan chromatism, the one that decorates the rooms of the palaces with the polychrome of the tempera that the eighteenth-century rediscovery of Ercolano and Pompei made so natural as to make them seem present for survival and not for inspired quotation. Style that of tempera that was so pregnant as to give birth to a sequence of generations among the landscape painters who returned to the curiosity of the traveler in Italy the memory of a light that did not exist elsewhere. The third reason for Nunziante's painting is existential, it is totally existential, so much to the point to be the only and possible support for the survival of the soul in that blessed and cursed part of the most fascinating gulf of the Mediterranean.
In Naples one lives only by denying the mechanics of history and absorbing in a baroque way the cyclical nature of events that was discovered by the finest of local philosophers, that Giambattista Vico whom today's world too often would like to ignore. History is round and not dull. Nietzsche also perceived it and taught it with the mystery of his writings to the Dioscuri brothers of Metaphysics.

Naples is the only city that legitimized the non-belonging to modernity, in a sublime exaltation, already in Mancini's painting and Gemito's sculpture. While the whole of Europe was running after the waves of the avant-gardes, these two long-white bearded prophets decided on their own path, which could then appear out of context, but which subsequent history found itself obliged to acknowledge, to ratify and applaud. That road foresaw, in the bleak day of the dying century, that the century itself did not exist except as the return of an eternal present.

Finally, remember it, the Neapolitan is, by divine right and by birth, not surrealist but extra-real. And if you find in Antonio Nunziante quotes that could bring you back to Magritte, Dalì or the De Chirico brothers, well, it is only because they had a Neapolitan base in their souls, but were not aware of it. Nobody had reminded them of it. Art is not always informed; sometimes it is as distorted as the experimental caprice of its history.


Receive the catalog
for free